Soldiers, Snakes and Stars. My time in Croatia with 4th Battalion The Mercian Regiment

I have recently come back from EXERCISE SAVA STAR 15 with 4th Battalion The Mercian Regiment, the reserve element of The Mercians. It was a 2 week exercise with the first week comprising of training and the second with either a patrol based exercise or a Potential Junior NCO (Non Commissioned Officer) cadre course. I was only there for the latter part of the exercise.

I flew from London Heathrow to Zagreb. I was picked up at Zagreb and it was a good 1.45 to get to the training area. Once there, I was introduced to my bunk bed in the tent. As I was not going out till the morning I prepped all my gear for the next few days.

It got dark pretty quickly out there and on a trip to the loo I realised that there were a lot of stars in the sky so I thought I would give a bit of 'Astrophotography' a go.

I knew that the D800 and the 14-24mm would be perfect for the job. I had a small Joby 'Gorillapod' with me so I just whacked the camera on that and pointed it at the sky. I had read once that you need to keep the shutter speed below 30 seconds due to the movement in the stars. I took a wild stab in the dark and set shutter speed to 25 seconds at f2.8 and ISO 3200 and pointed it pretty much straight at the sky. When I looked at the back of the screen I realised I had captured what looked like either a satellite or meteor/comet. I was happy with the results and did a quick edit. 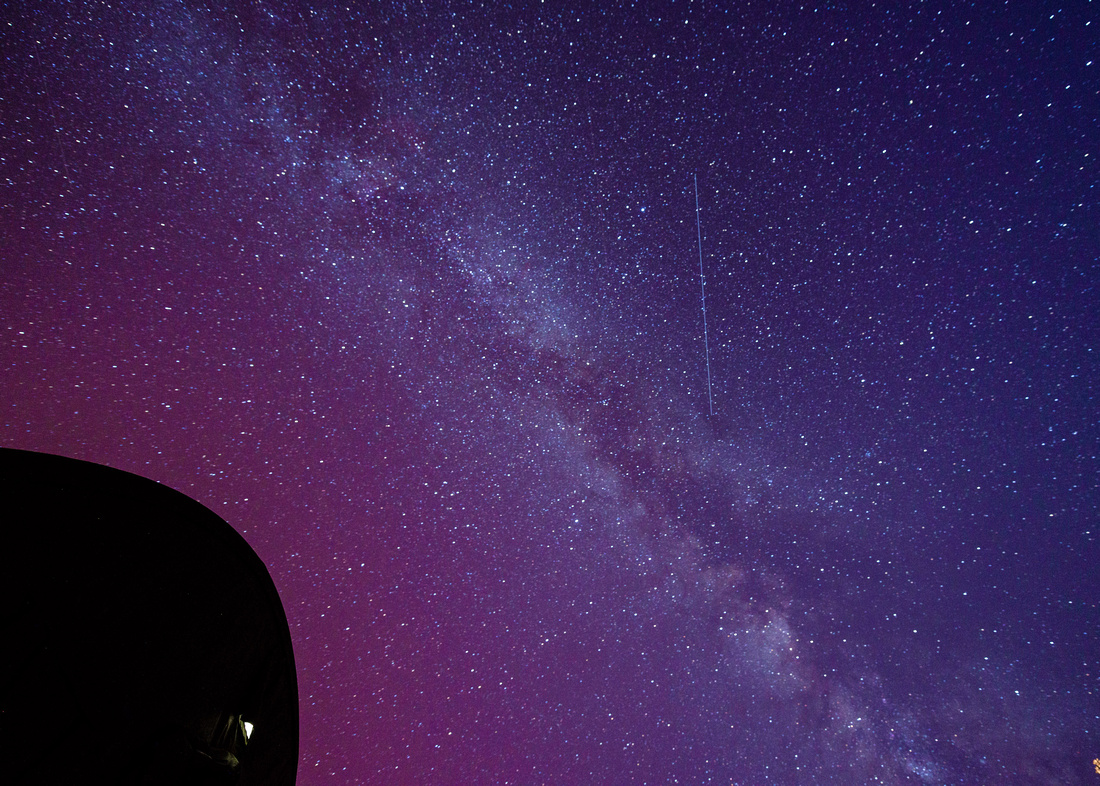 The large black object bottom left is the tent I was staying in.

I posted the photo on a critique group and someone on there pointed me in the direction of a site that explained the correct colours of space should be like (http://www.clarkvision.com/articles/color.of.the.night.sky). So I went back and did a re-edit. 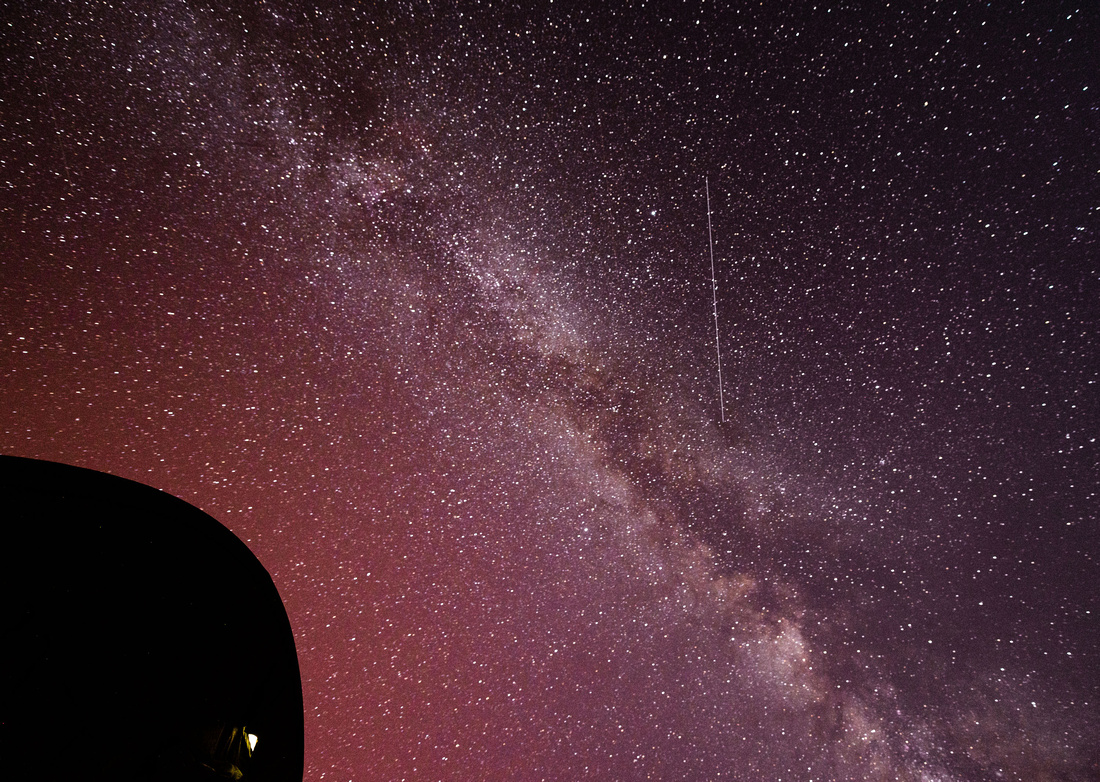 The following night I went out again into an open space and tried again. Here is the final image

Right, now onto what I was really in Croatia to do. The first morning I was tasked to go to the PJNCO harbour area (a military term for a occupied secure area where the troops were staying) and take a few shots of what was going on and to grab some portraits. After waiting over an hour for our lift to arrive we set off into the training area. It was dusty as hell and sitting in the back of a open top Landrover was not the best situation for the camera kit.

Here are a few images of what I came back with that morning. 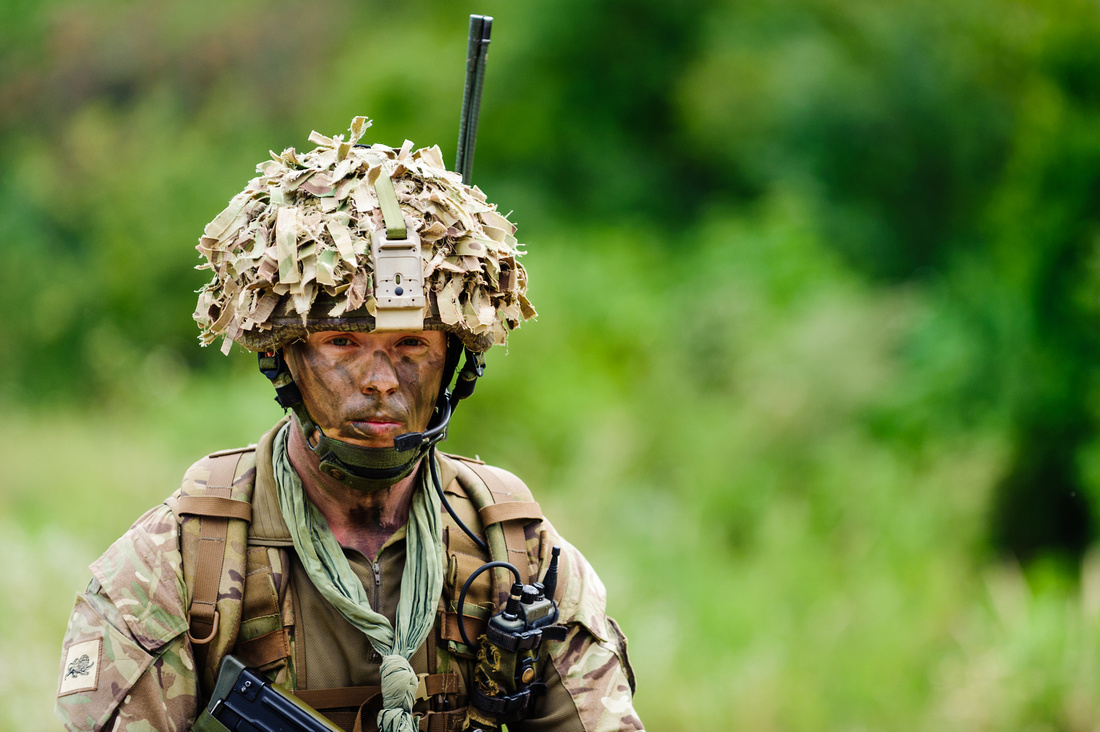 A portrait of a soldier from The Duke of Lancaster's Regiment 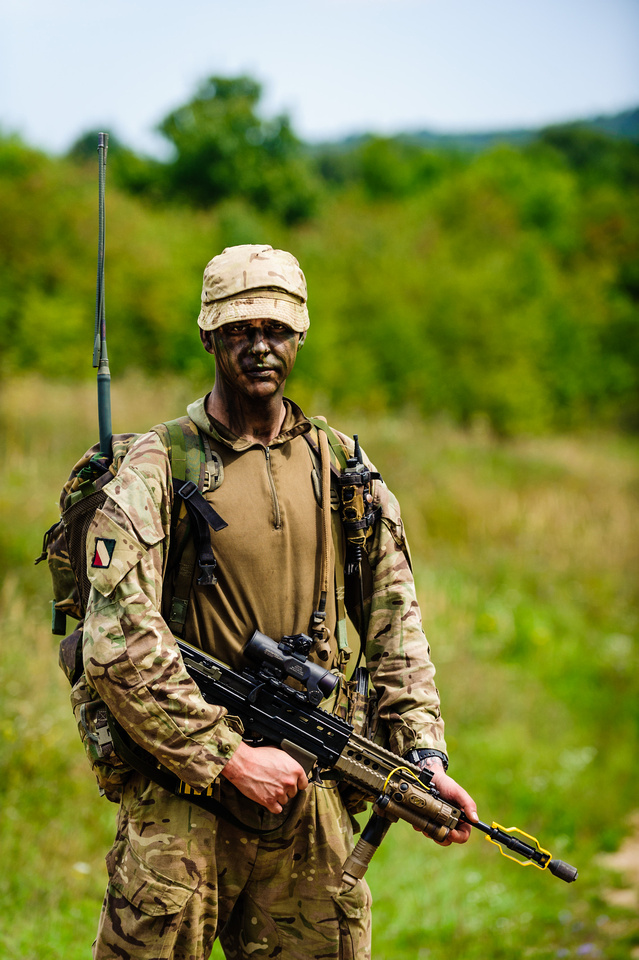 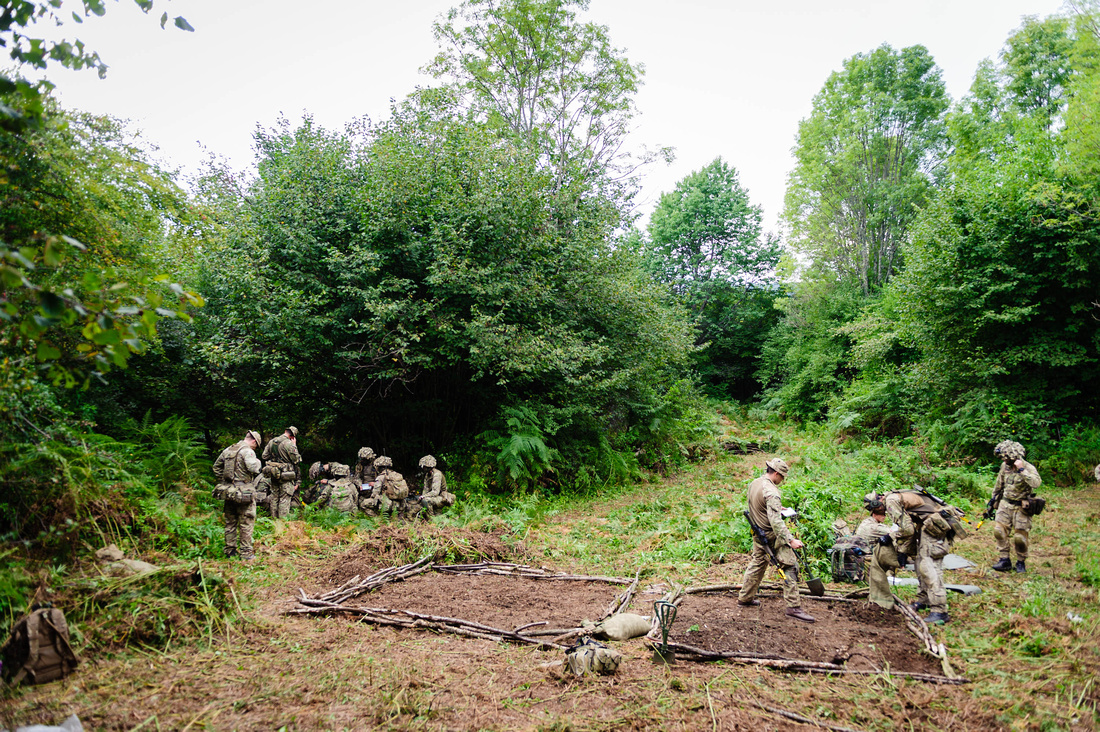 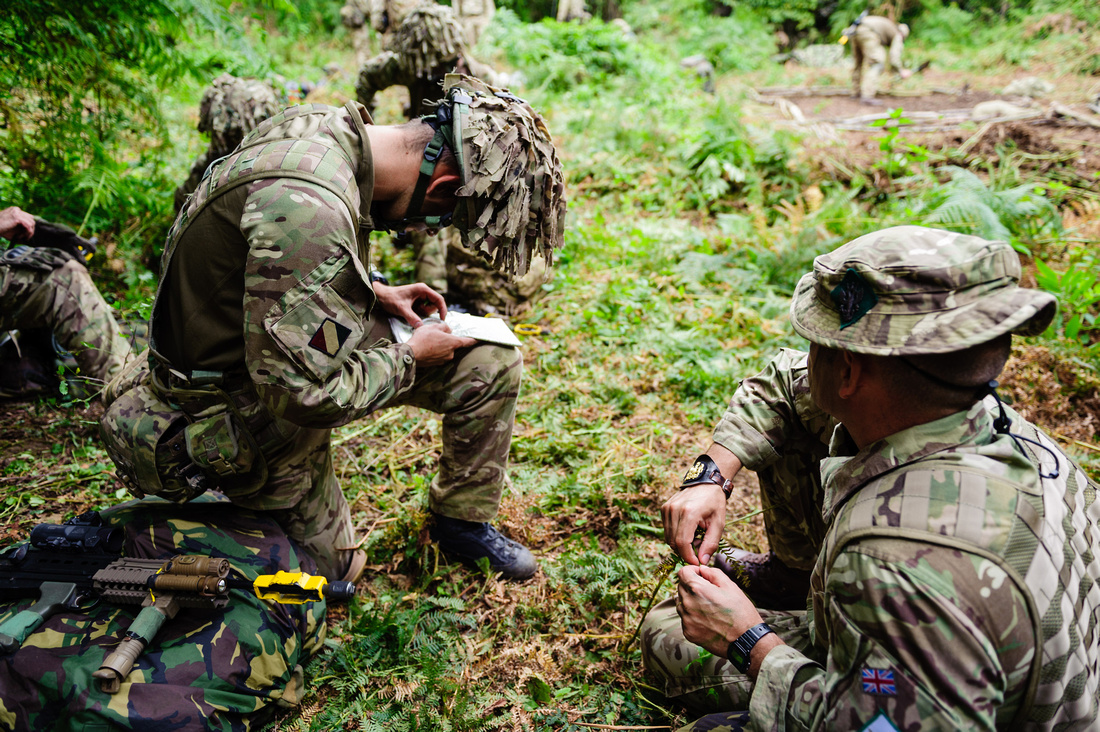 A soldier gets his bearings 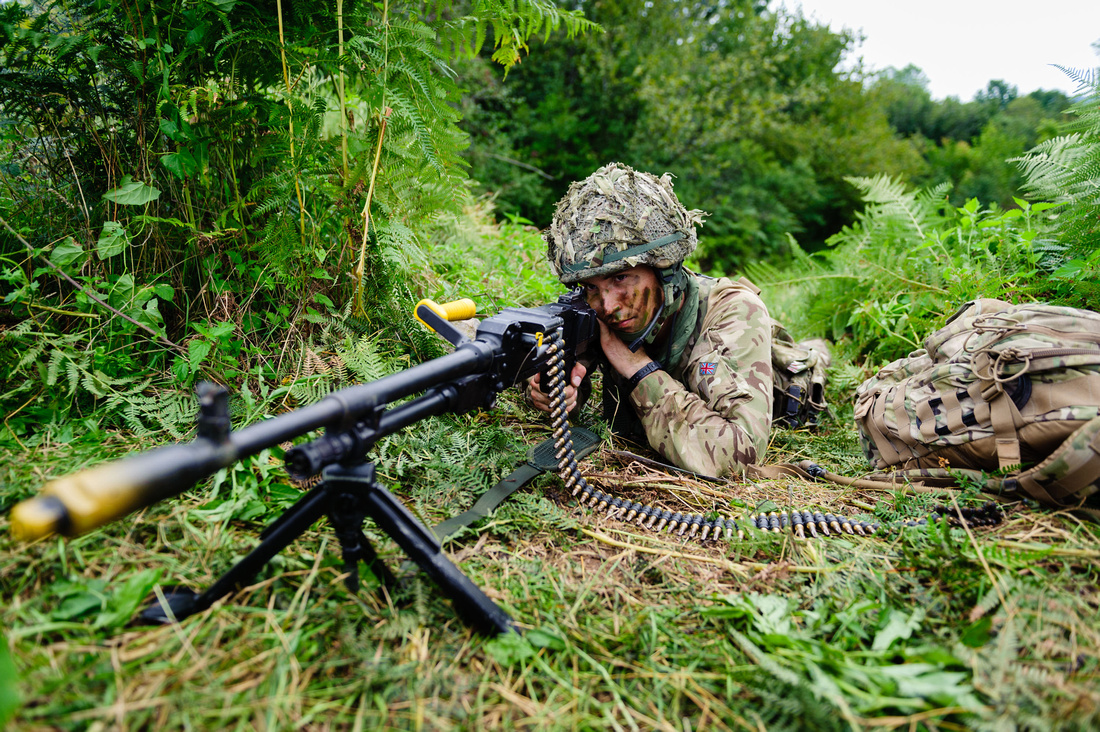 On stag with the 'Gimpy'

I spent about an hour there and moved back to the camp we were staying at. Our next timing was at 1600 for the section attack part of the patrols course. The patrols course had been working with the Croatian Army for the last few days so they would be taking part in the section attacks as well. I had the Coy Adjutant with me and he thought he knew where he was going. After about 30 mins of trekking through forest and dusty tracks we heard shots being fired. We both started running towards the sound. After another 5 minutes of running we caught up with the action. I left the Adj behind and I got stuck in with the sections attacking the enemy positions. They had 4 enemy positions to attack ranging from small bunkers to full on machine gun posts. I got myself stuck in with the guys and followed the lead sections as they worked their way through the enemy positions. This was all in 36°C heat as well... 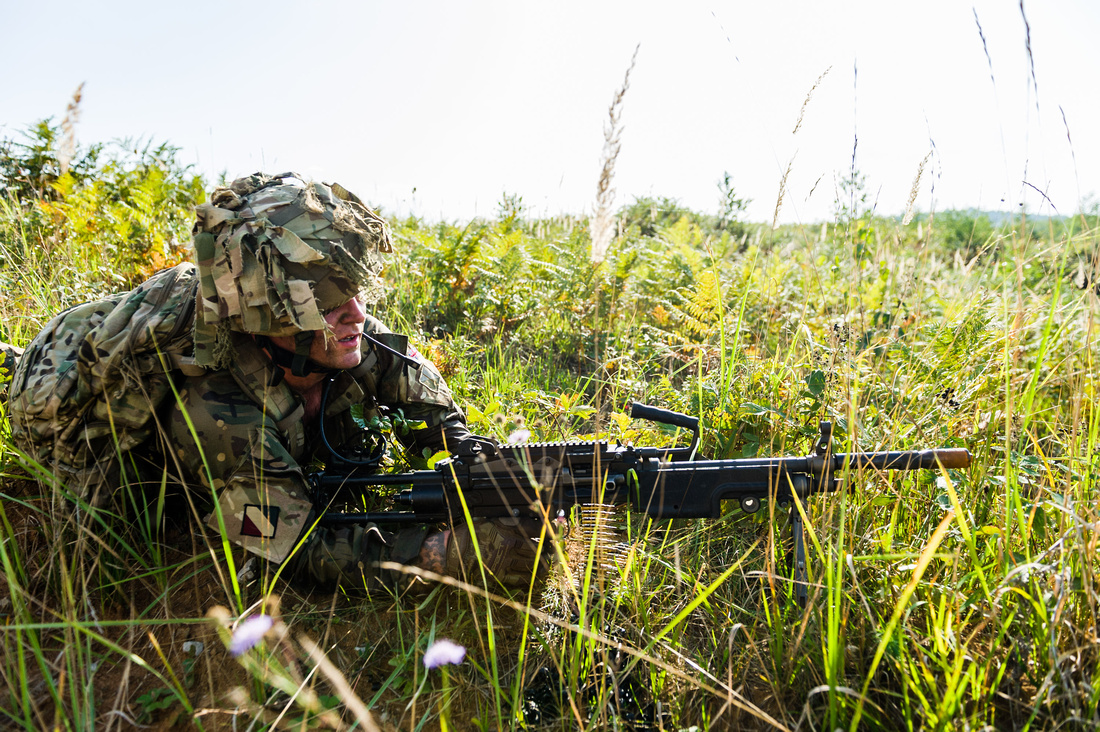 Giving fire support with a LMG 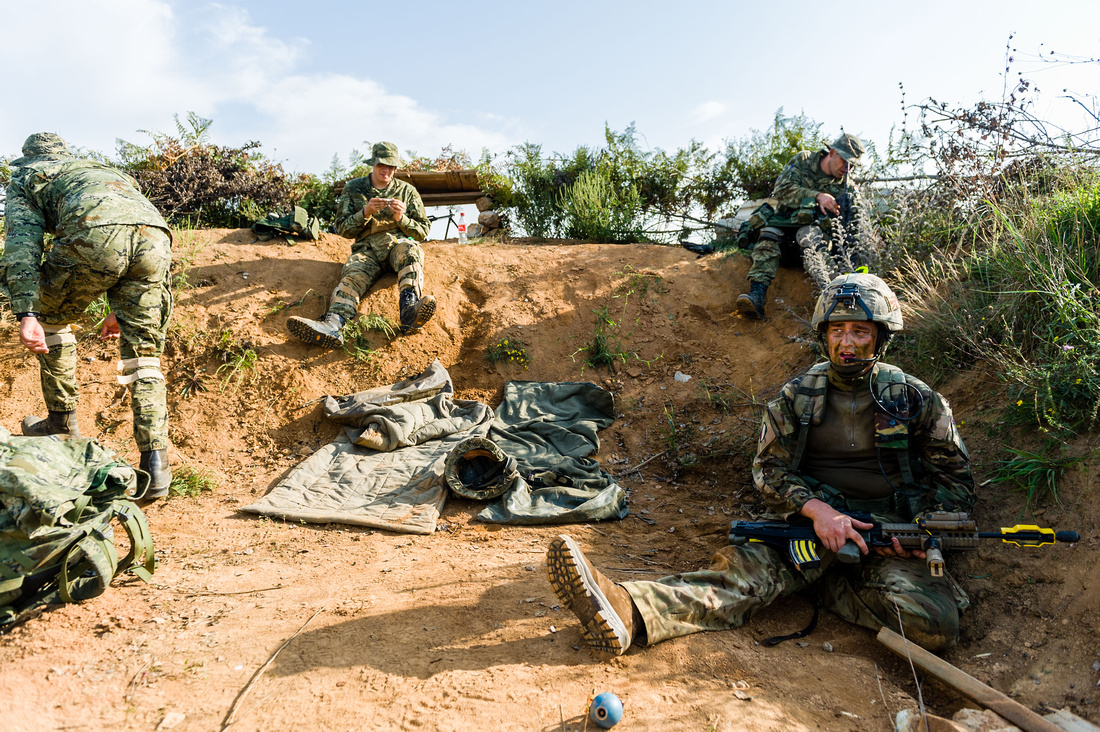 'Hooped' after assaulting the position 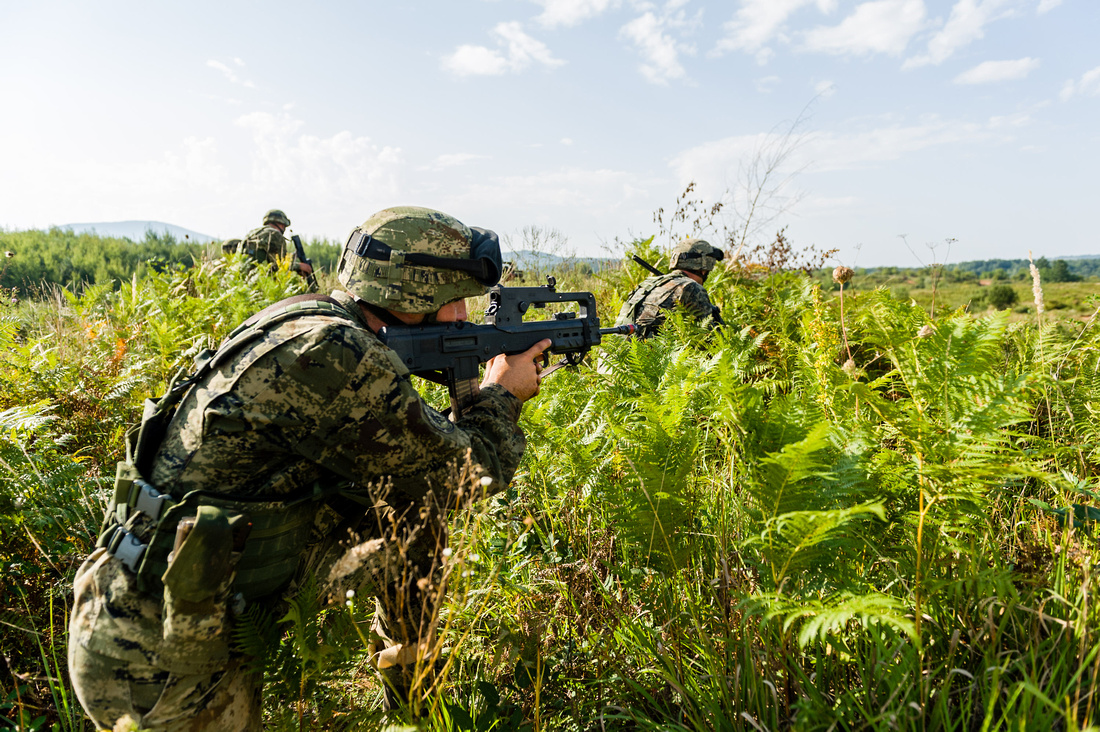 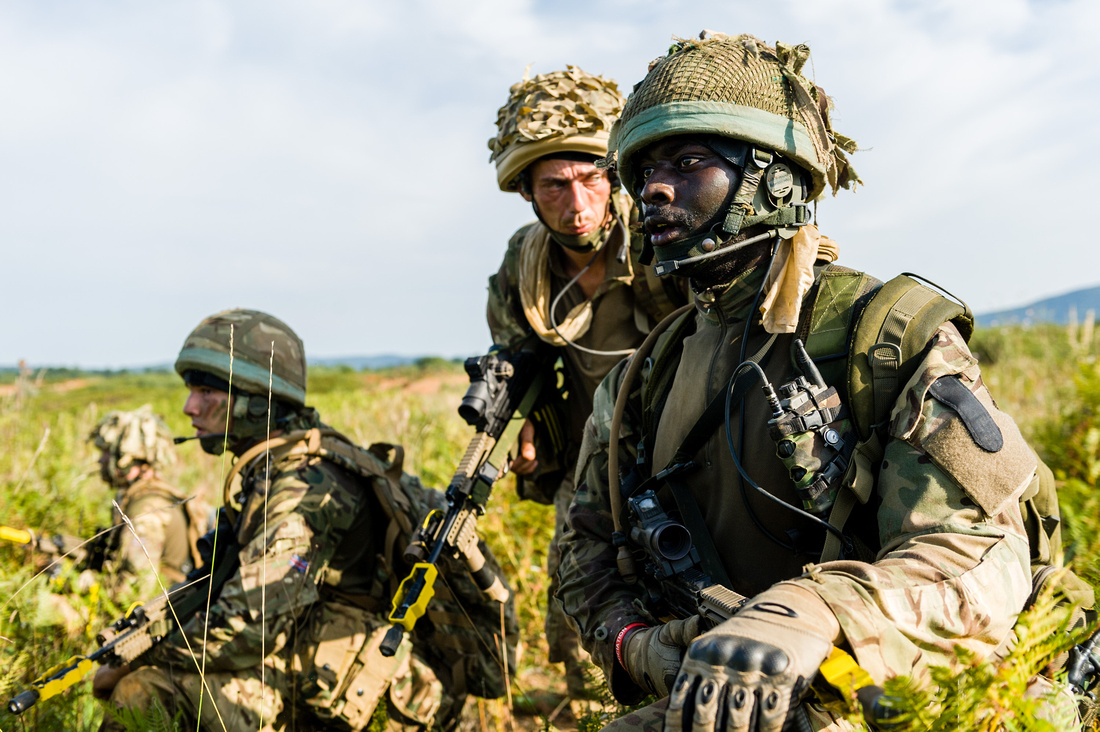 A section 2ic takes in what is going on around him 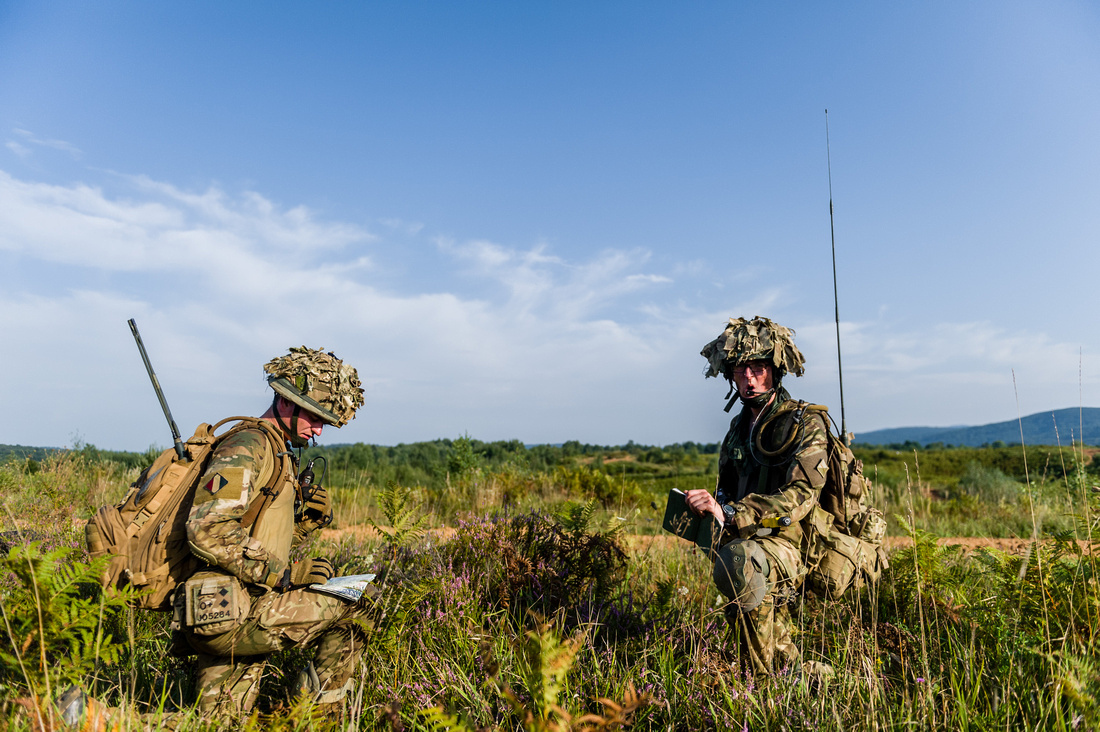 The Platoon commander sends a sitrep 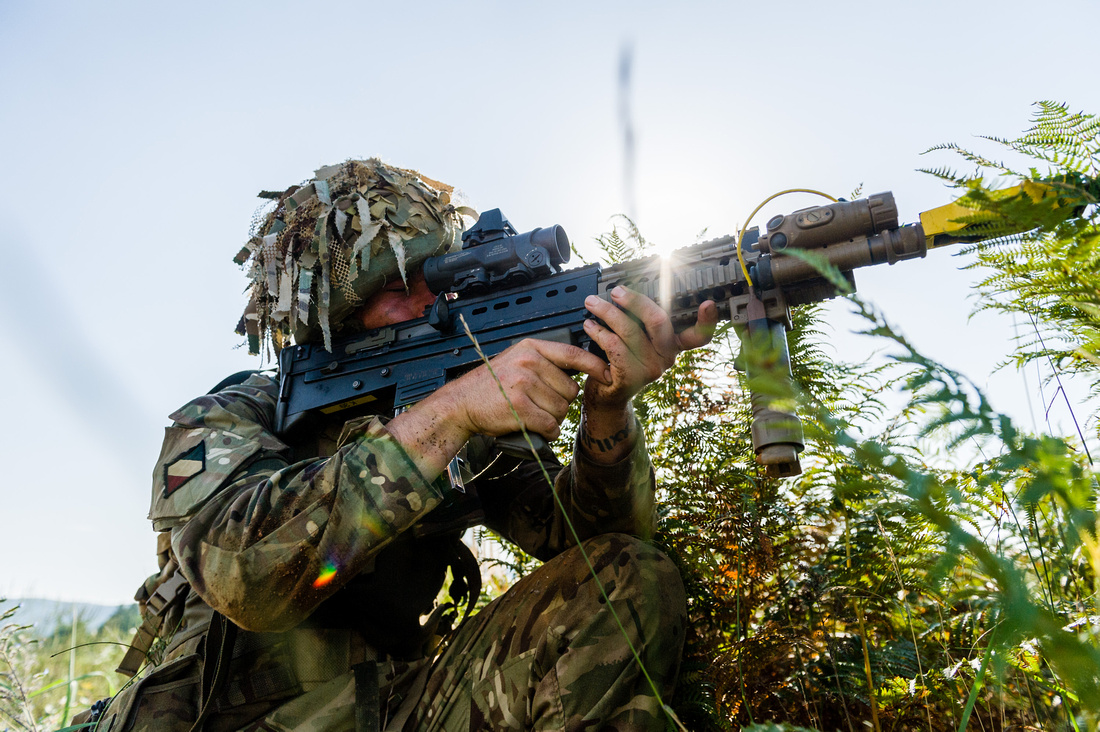 After about 2 hours it had all finished. We made our way back to the truck heading back in the direction we came from using the out of date map that we had. Some of the training area was still a live minefield so we had to be careful where we went. 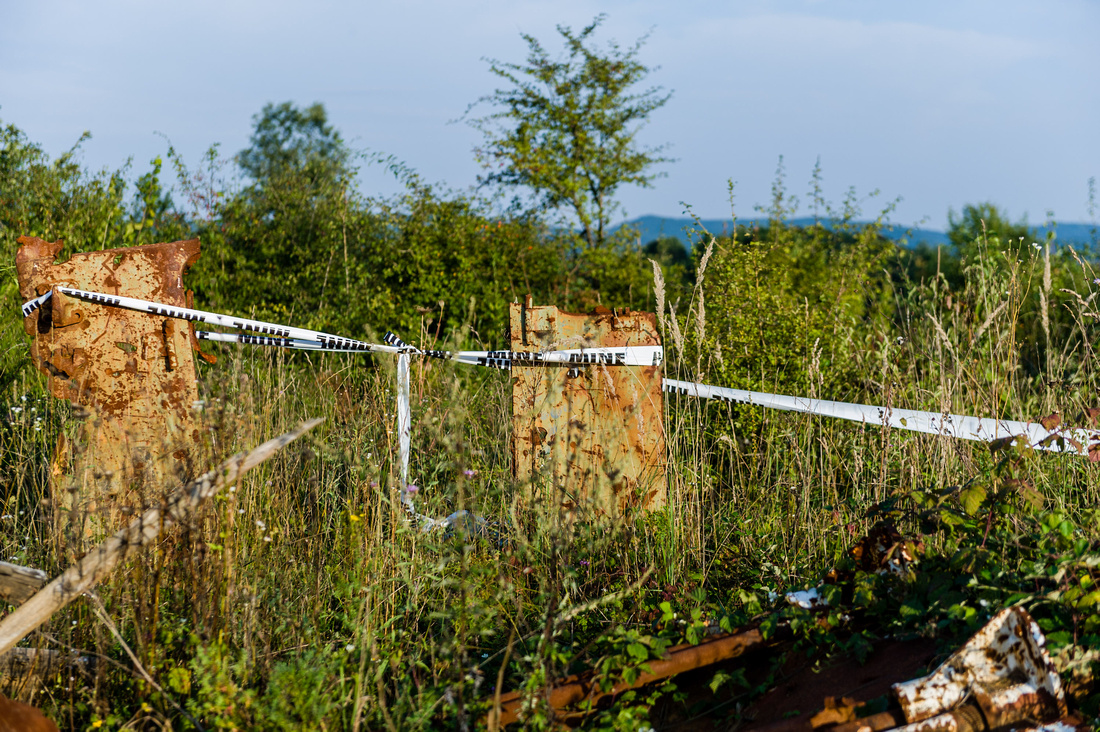 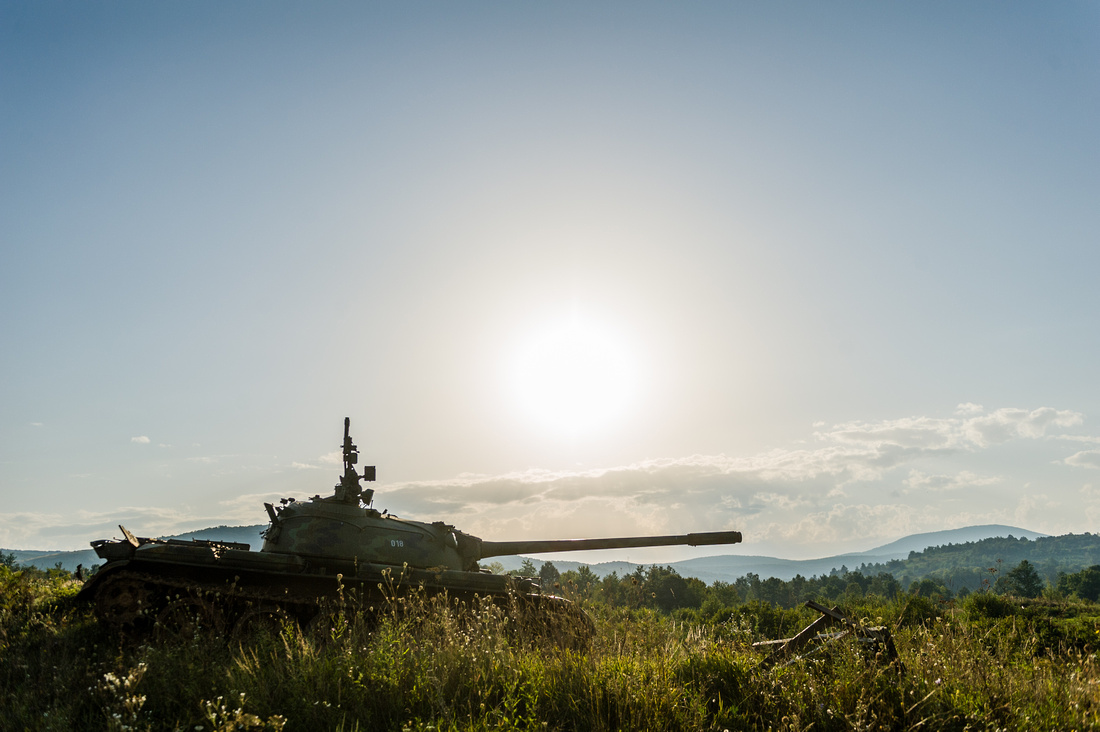 Russian tanks are littered around the training area

Once back at camp it was back to the tent to dump the images from today on the hard drives then get my head down as I was to be up at 0200 for the final attack of the PJNCO course.

0200- It was about a 45 min drive to the start point so I put my hood up and made myself comfortable as I could in the back of the truck. We got to the location just as the troops were preparing to set off. As I knew it would be a long night/early morning I travelled light, all I took was a Fuji S5 Infrared converted camera with a Nikon SB700 with IR flash cover paired with a Nikon 14-24mm lens, and my D800 in a pouch for when the sun finally rose.

Taking the Fuji S5 out with me enabled me to take images in complete darkness without emitting a flash ruining the guys night vision and giving away their position. 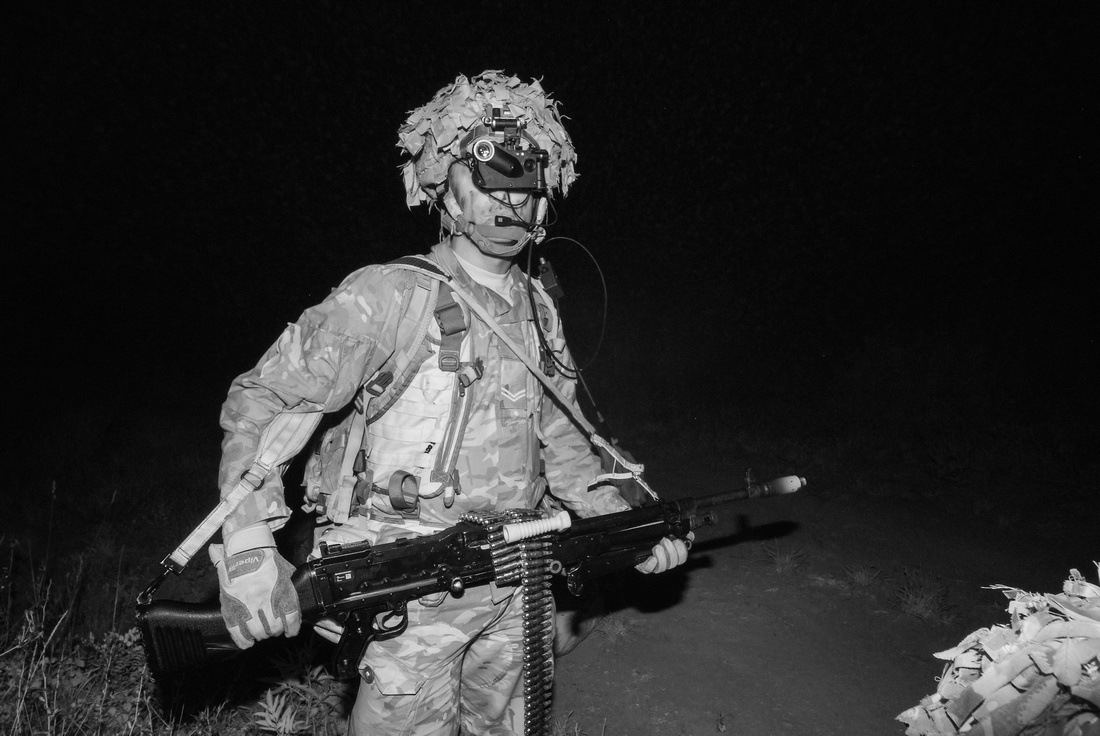 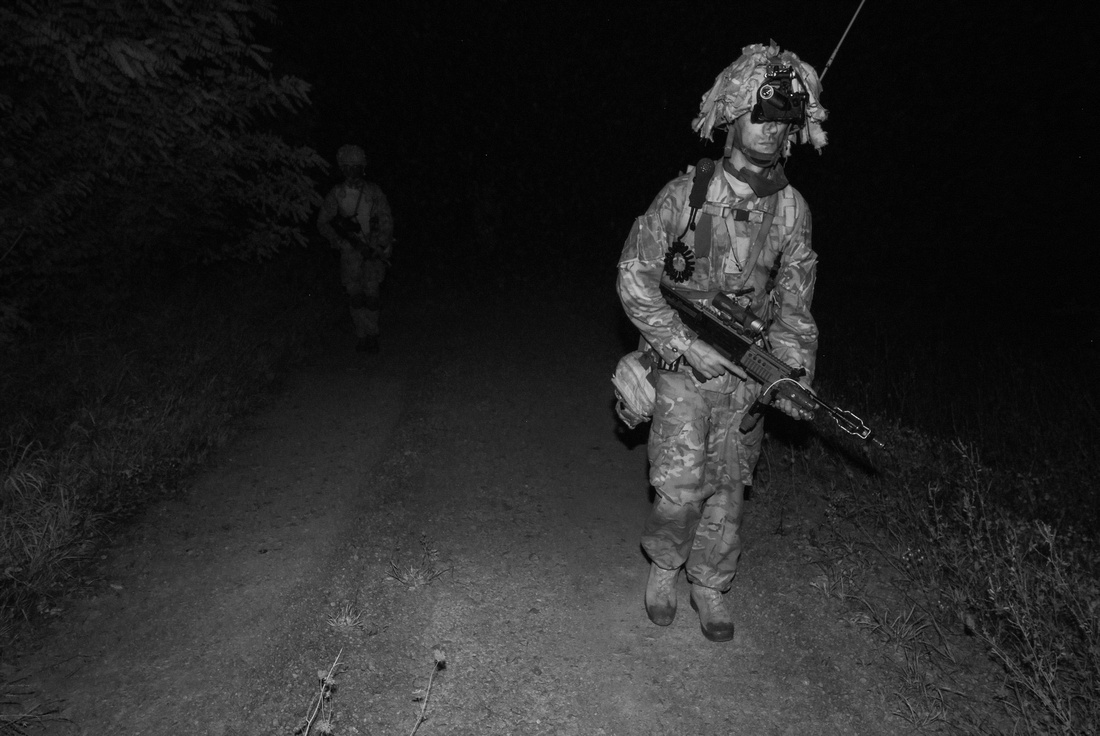 Troops patrolling out to the 'LUP' 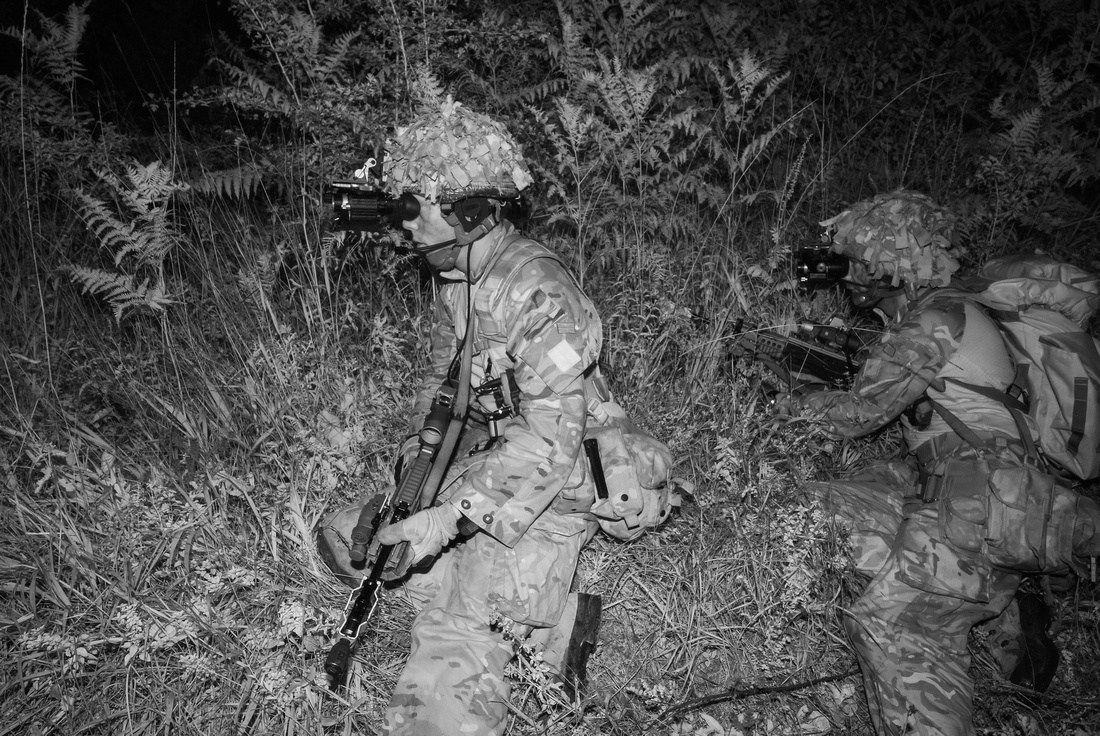 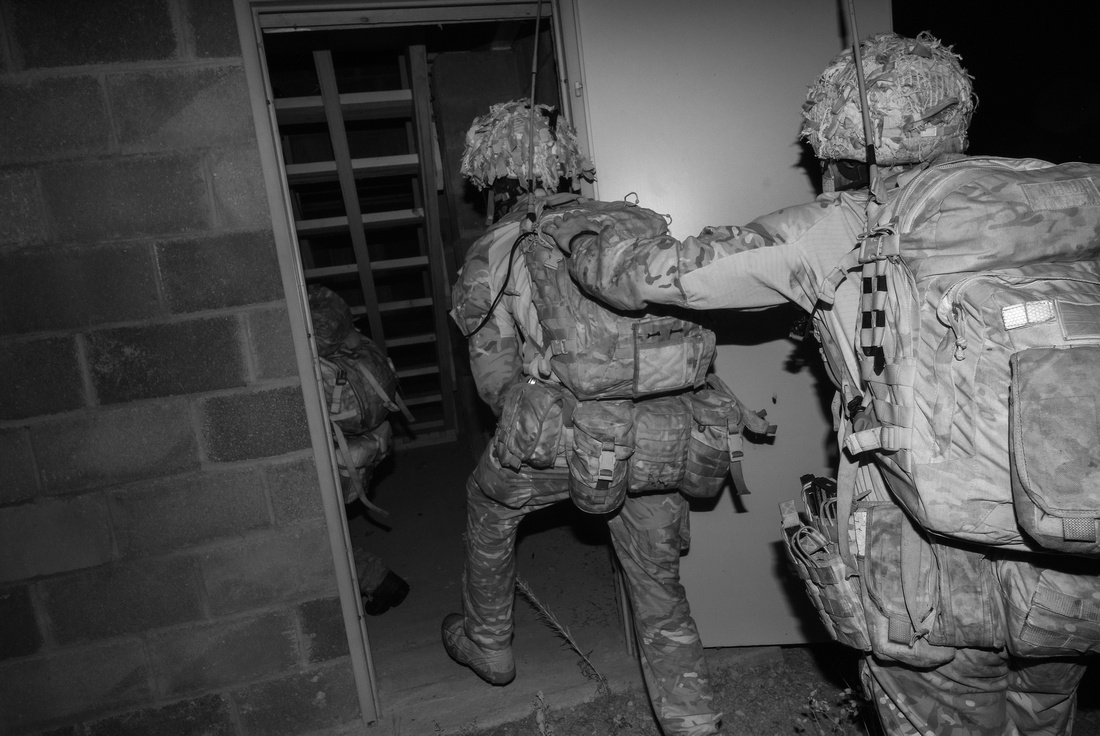 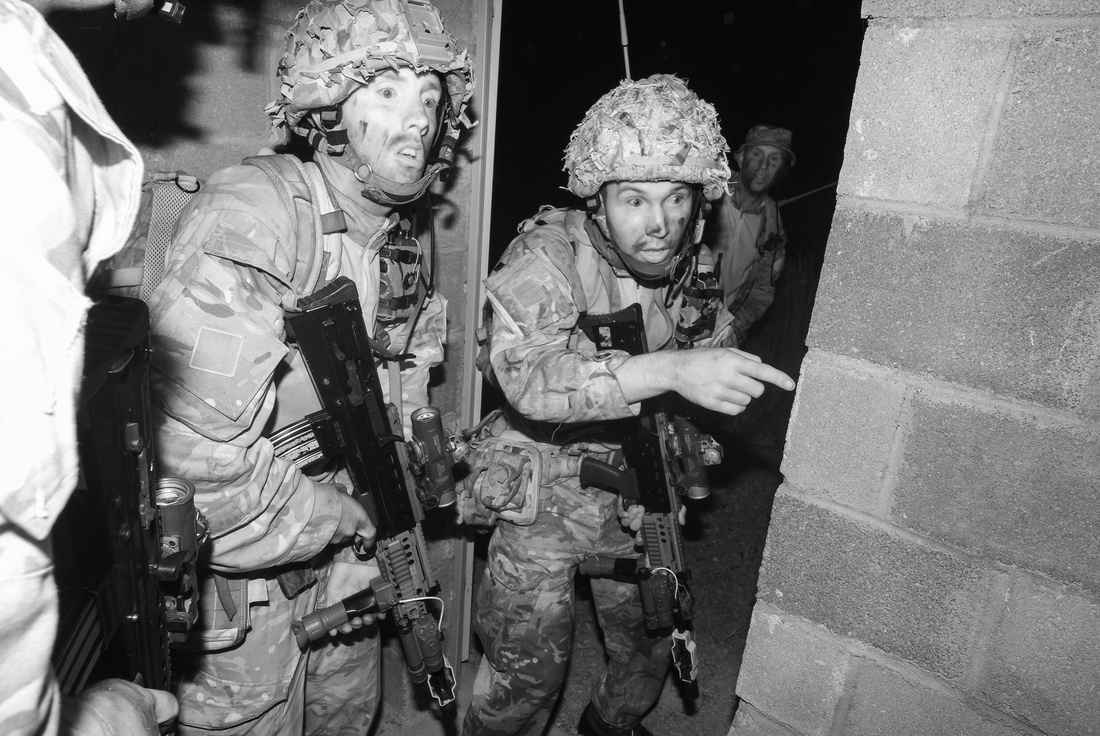 The Section 2ic gives orders inside the building 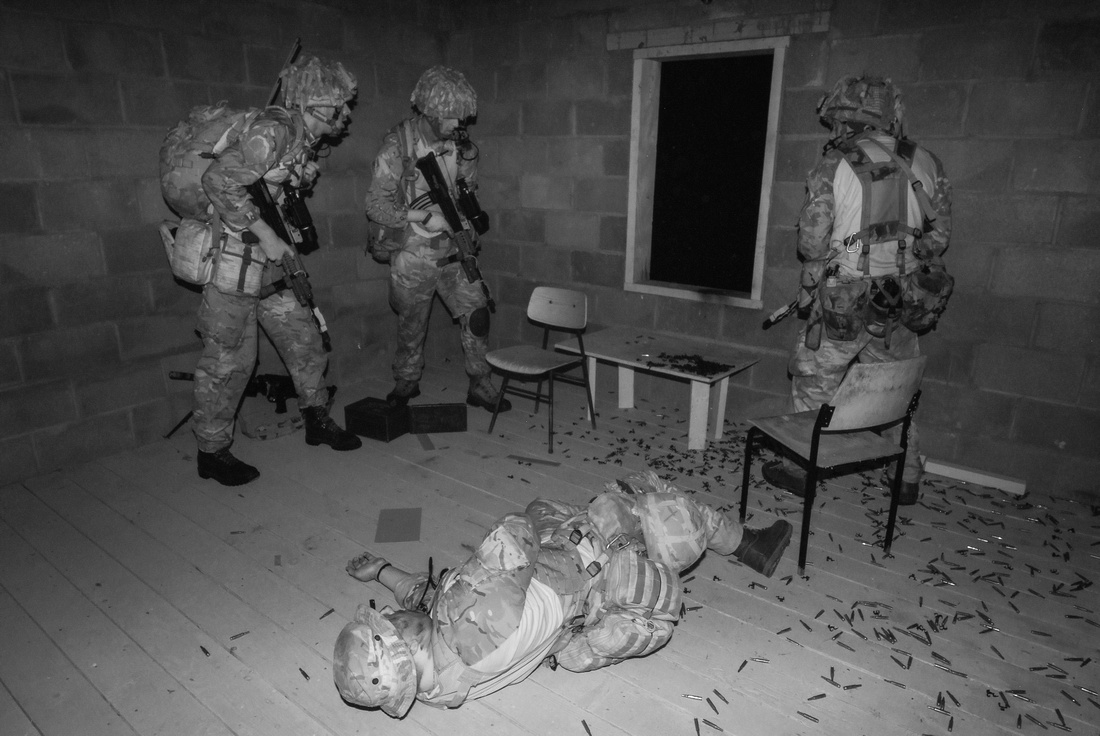 It didn't take long for the sun to rise so out came the D800, I had to push the ISO pretty high at first so I could keep the shutter high enough to keep up with the action. I only took the one lens (14-24mm) with me as I wanted to get pictures that felt like you were there with them. I could either get really close up and personnel or step back and get a shot that immersed you in the scene. 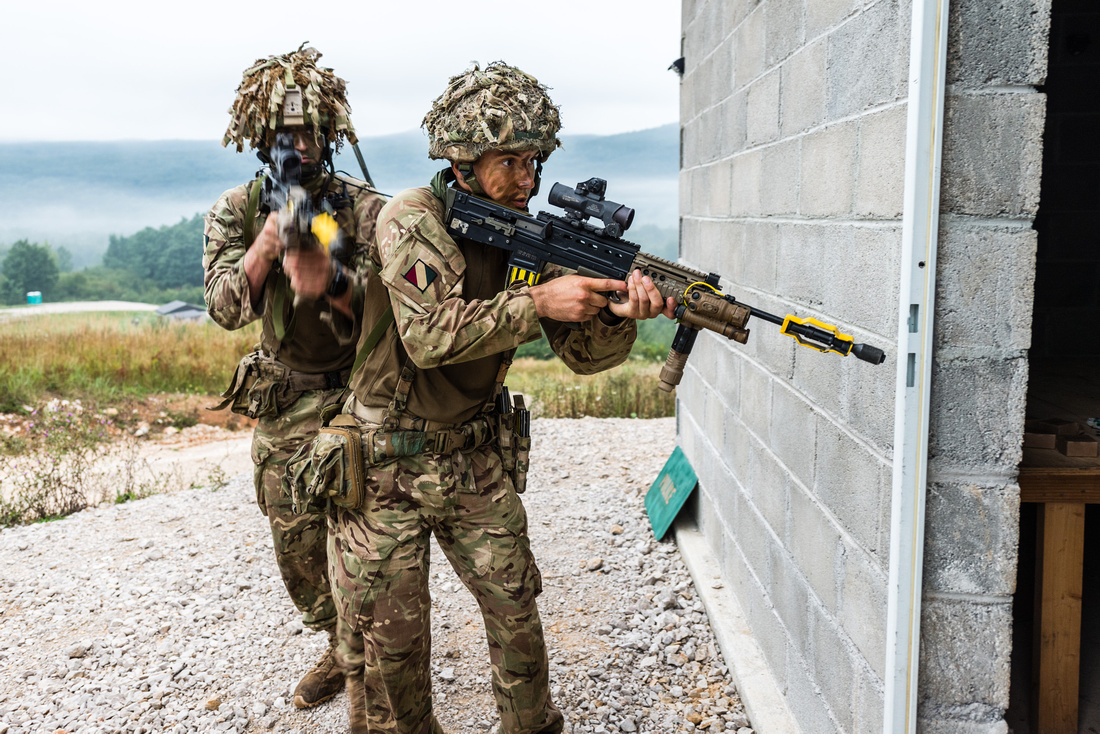 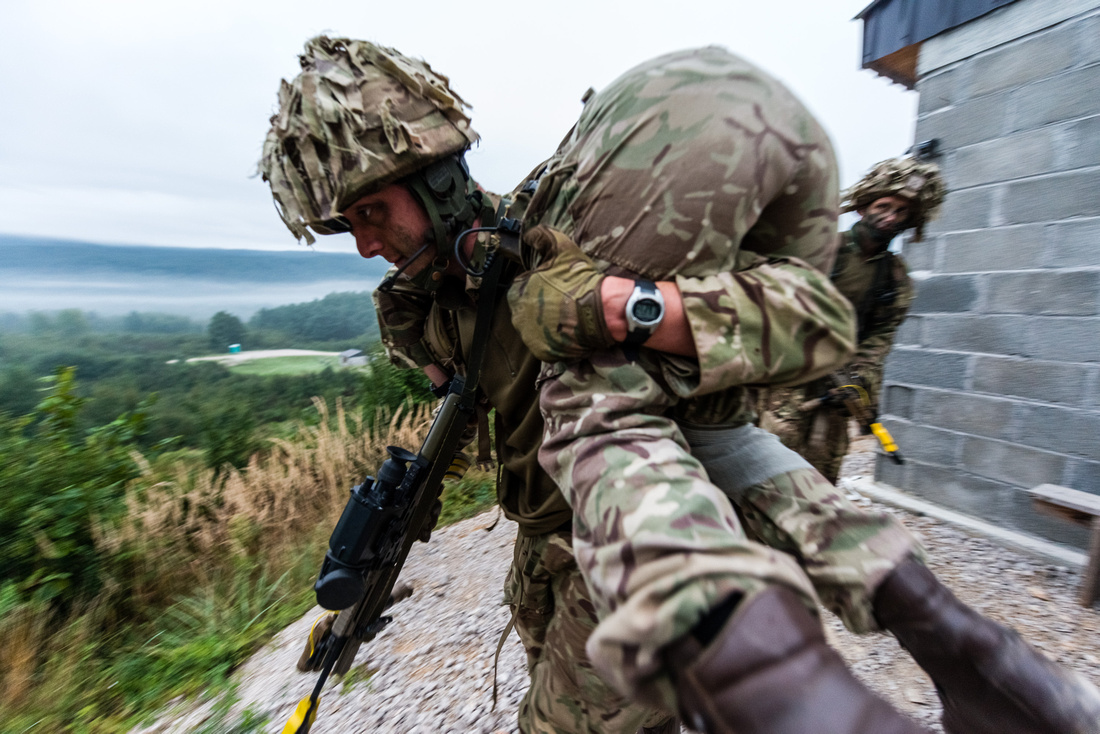 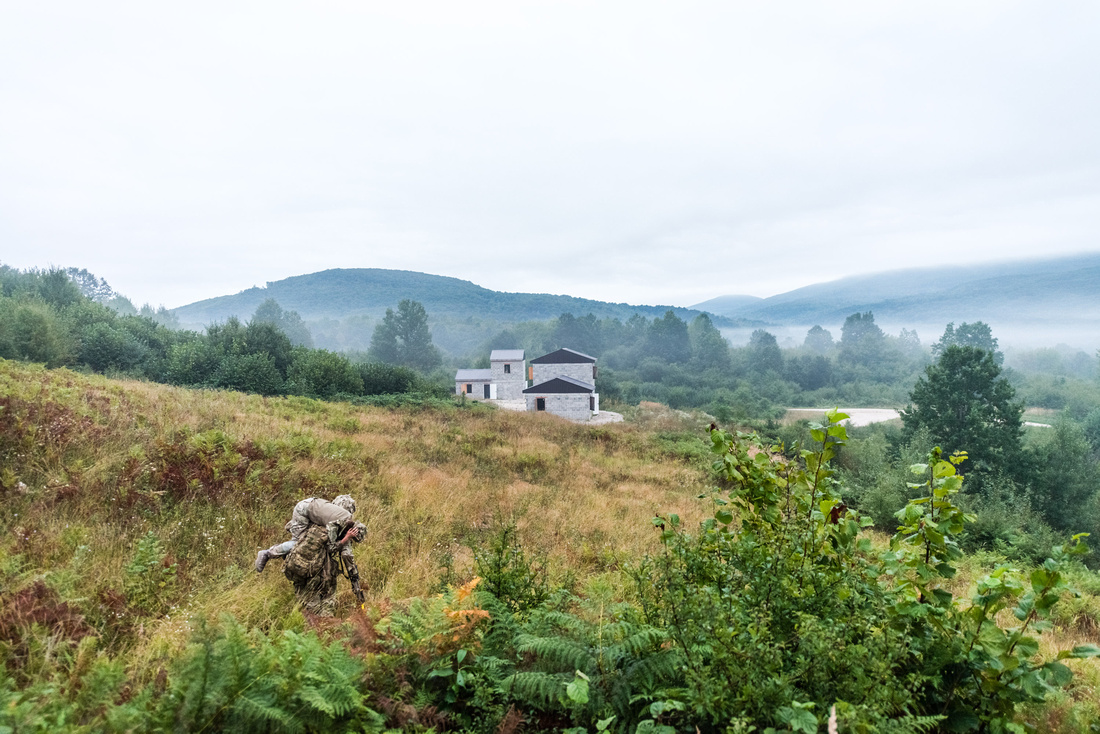 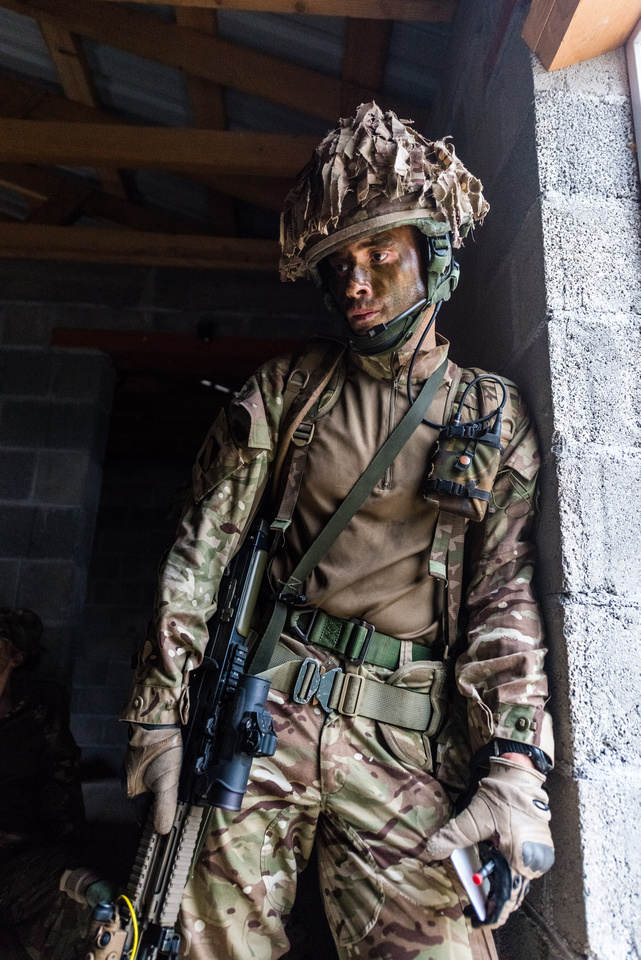 As this part of the exercise closed to an end I saw a few guys crowding round the side of a building. I want over to see what it was all about, there was a snake next to the building. There was a Croatian soldier with them and I asked him what kind of snake it was, he said it was a Horned Viper and it could kill you in about ten hours from its bite. Naturally I took a photo of it. When I got a bit too close it showed its fangs and went to strike at the camera I pretty much shit myself and left it alone. 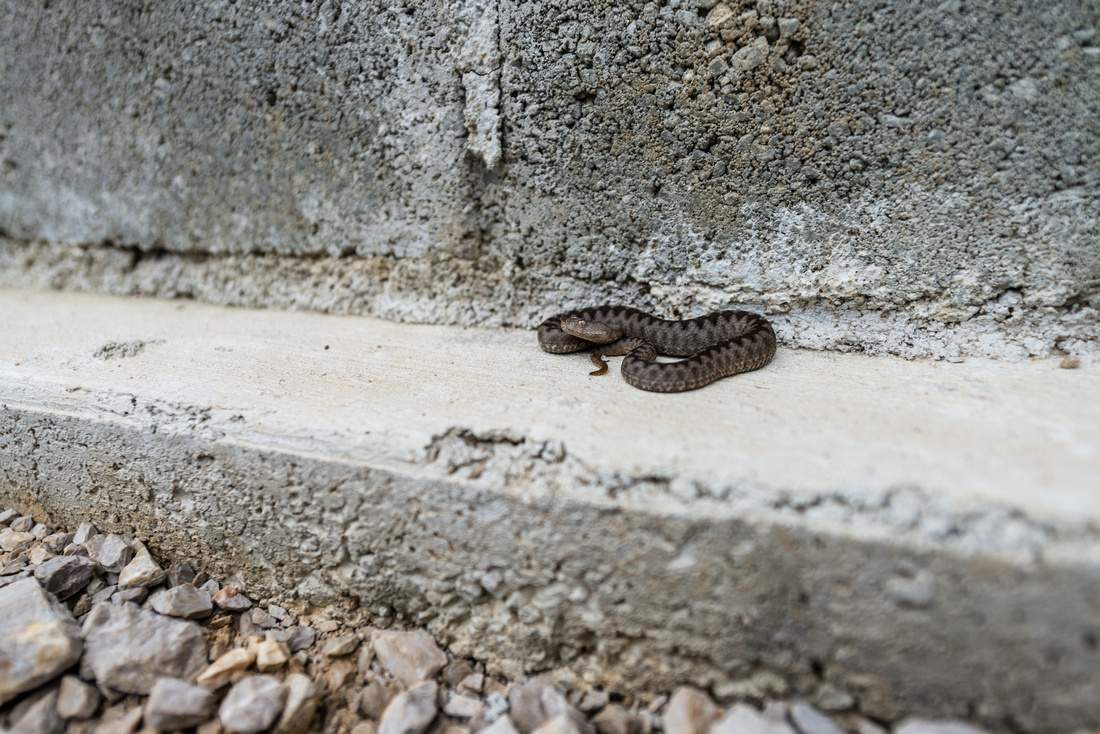 Once we cleared out of that area I was off to a massive viewing platform for the usual group photos on top of the mountain. 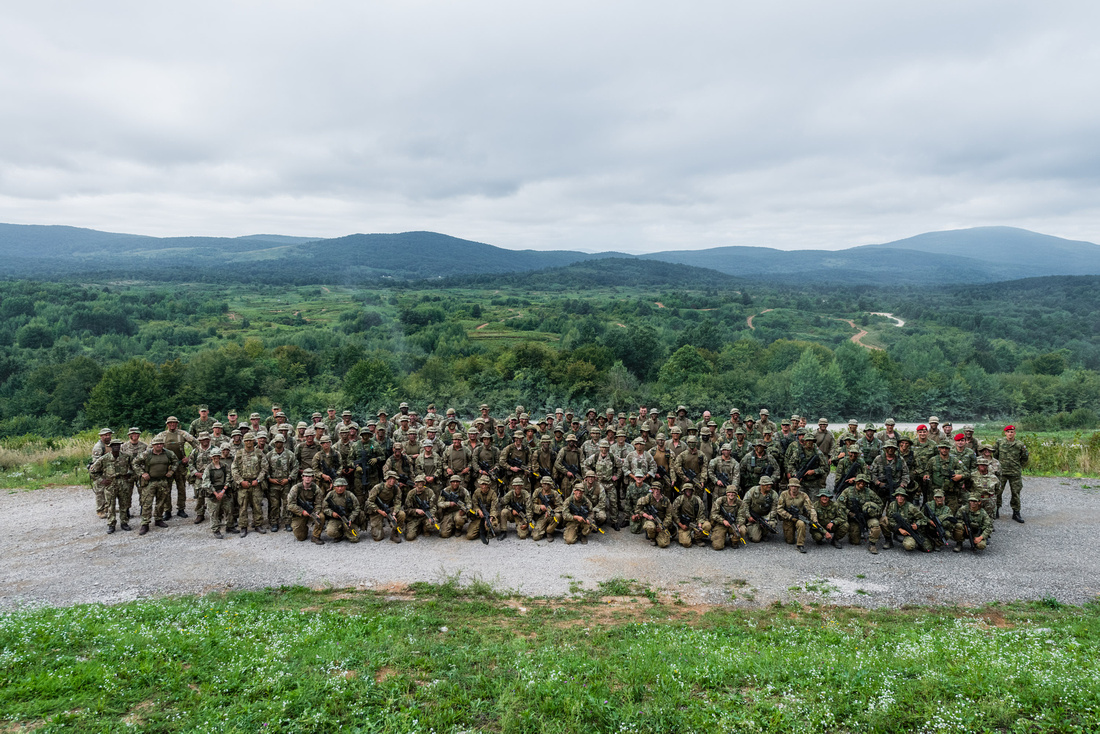 I enjoyed the exercise and loved getting involved with all the action. It's the kind of photography I like doing.  Croatia is a lovely country and I am already planning on going there on holiday.